I planned for a few days to take advantage of the projected 68 degree, partly sunny day to make a run the nearly 100 miles to Cooper’s Rock State Park and take photos off the actual rock. I’ve tried for a few years now to get there during the Autumn colors, but it never works out. Our sun (partly sunny) was apparently delivered somewhere else. It still was a good day, though. The riders today were my brother-in-law and the new female rider I’ve mentioned lately. The others couldn’t make it with their work schedules.

We left late because of delays in Sharyn’s morning. Once she was all ready, she phoned and we timed our leaving so we could meet her part way. It was 11:30 as we pulled out. The temp was about 58 and it was cloudy. The air was a bit cool and bearable, but switching to my new HD gloves and HD balaclava made it just right. On the way there, travelling along I-79 South there were spots of absolutely beautiful trees. Even with the less than optimal sun, the colors were wonderful.

We made it there. 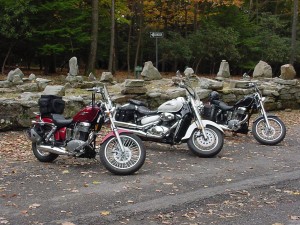 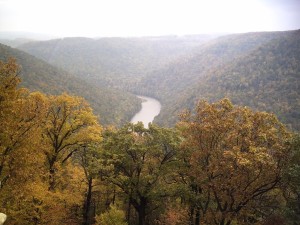 When I arrived back, my new close-out priced, full face helmet had arrived. I got another layer of clothes… put on the helmet… and headed to Sharyn’s to get my hair cut. Finally arrived back home about 8:30 having added about another 250 miles on the Vol.

More pics are at these two links.