Wolf-whistles and unwanted texts to be classed as hate crimes

Offensive wolf-whistles and cat calls are to be investigated by the police for the first time, with misogyny and sexual harassment classified as a hate …

It occurred to me that there is a certain irony in the fact that women can cut a man to his soul without seeming to know it; given that they are supposedly so emotionally in-tune and driven.

Awhile back there was a bit of controversy on a blog I commented on.  The blog is by a young woman who writes about guns and 2nd amendment issues as well as general, current events and personal events.

She made a post that made her sound like a gold digger and I commented on the fact.   That started a lot of insults directed at me from her and people who frequent her blog.  It was old news and was a dead topic.   So, Friday she made a dig at me with a new post.   She was posting about the recent news about billionaire Richard Branson and found it necessary to post:

I know this is likely going to end up in a fight about whether or not I’m a gold digging slut willing to leave Sebastian at the slightest hint of more money simply because I’m a woman and I mention the word billionaire, but who cares.  (I’m too tired to look for the last billionaire post,
but who the hell knew that looking for a missing shoe matched the suit I happened to be wearing to meet a billionaire for business would turn into accusations that I’m looking for a sugar daddy. Anyway…)

At the time, she kept calling into question my mental stability and emotional stability; and said I got the impression I did because I have “serious issues”.   This time, when I replied, she said, “I really hate to say it, but I think you’re projecting some serious issues.”   Isn’t that cute?  Not only is she concerned for me, but she’s also a psychic psychologist.    So, I responded that she doesn’t hate to say it.  That she has said it enough that she should at least admit that she likes saying it.

And she says that my asking other people what they thought of it was irrelevant because they don’t count.  I’m not quite sure why.  But, she said “your friends” (which I didn’t even specify who I asked) who saw one post “don’t count.”  And she falsely stated that I was the only one “out of everyone who reads this blog” who “read into it that I was hunting a billionaire.”    Well…. I know and she knows… that I wasn’t the only one.

But, she’ll never admit it because it would require that she admit the shallow, carnal thoughts that go through her mind.  That won’t happen.

The next post was about her looking for a Halloween costume.  So, I suggested a gold-digger costume since she brought it up.  I mean…. after all…. she has the suit and shoes. 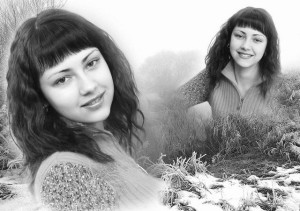 Do you know this woman? I’d appreciate it if you would write me if you do.